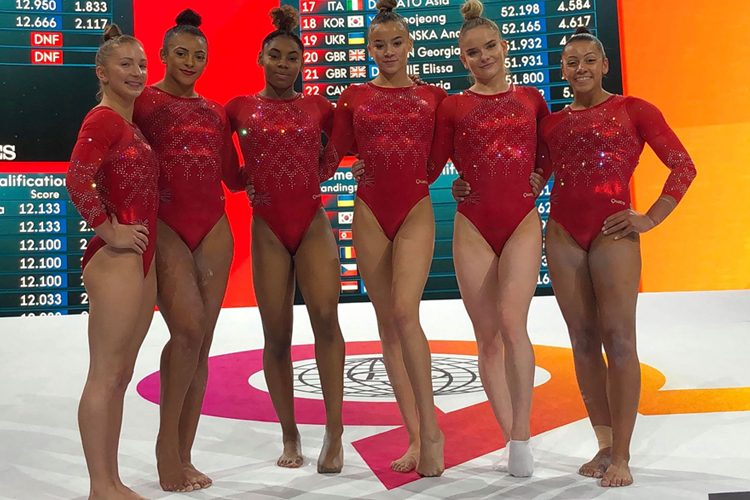 The British women’s team have qualified a place at next year’s Olympic Games in Tokyo, with a 7th place finish in qualifying at the 2019 Artistic World Championships in Stuttgart, Germany.

The result also means they qualify for the team final, which takes place on Tuesday. There will also be individual finals for Alice Kinsella who qualified in 15th place all-around, Becky Downie, who finished 5th on uneven bars, and Ellie Downie who placed 4th on vault.

Competing in the 7th of 12 subdivisions, it was an early start for the British team, as they were first out to compete on Sunday. With Olympic qualifying the priority, the top nine teams, excluding those that finished in the top three at last year’s World Championships (USA, China and Russia), would qualify a place this time around.

In qualification, four gymnasts competed on each apparatus, with the top three scores going towards the team total.

Starting on uneven bars, Alice (13.966) got the team off to a great start with a clean routine with just a hop on landing. Next up was Ellie who had to count a fall midway through her routine after coming unstuck on the low bar. After the British team submitted an enquiry that was rejected, her score of 12.666 remained. Georgia-Mae Fenton competed third and on her favoured apparatus showed no signs of nerves, scoring 14.333. Up last, Becky, bidding for her first individual world medal, produced a well-executed, high-difficulty routine for 14.800, cementing her place in the final.

Moving on to beam, Georgia-Mae competed first, counting a fall on one of her spin elements for 11.566. Ellie was next up and had to fight throughout her routine, but battled impressively to score 12.366. European beam champion Alice competed third and showed all of her quality on the apparatus with a very clean routine for 13.433, just missing out on the final on that apparatus in 10th place. Becky (13.100), who enjoyed a great morning in Stuttgart, also went through her routine clean.

The third rotation saw the British team head to floor, with Georgia-Mae (12.500) showing plenty of artistry throughout her routine. Alice scored 12.433, opening with a near perfect tumbling pass before the rest of her routine followed suit. Ellie had to count a fall on her double-twisting double salto pass but finished her routine well for 12.433. Last up it was Taeja James – competing in her first World Championships as a senior – and despite stepping out on her opening tumble, she had the crowd on their feet, scoring 12.500.

With the British team needing a strong finish to give themselves the best chance of an Olympic place, they moved on to vault. Taeja competed first, and her one and a half twisting Yurchenko vault with a slight hop on landing, gave her a score of 13.766. Alice competed next and continued her consistent performance throughout the competition for 14.300, securing her place in the all-around final. Ellie, known for her high difficulty vaults, produced two of her best, with her second vault – a Cheng – scoring 15.100. Her first scored 14.466 giving an average of 14.783 to put her in top spot on that apparatus after seven subdivisions. Ellie would eventually finish in 4th place, confirming her spot in the final. Completing qualifying for Britain was Georgia-Mae who executed brilliantly for 13.533.

Becky said: “There was definitely a lot of pressure coming in to this world’s, especially because of the Olympic qualification, and with last year just missing team final, we knew we needed to go out there, do what we trained, and we’d be fine. My bars in training has been really good and I feel very happy and comfortable with this routine – probably the most I ever have . With that in the back of my mind, I just needed to go out, do a normal routine, and I knew I’d be fine.”

“It wasn’t easy to come out and do what we’ve done, and it wasn’t perfect, but everyone can be really proud that we gave it our all.”

Ellie said: “Today really wasn’t my day all-around but I’m proud of the team. I made mistakes, especially on floor, that I never usually make. Finishing on vault I knew I just had to go for my big routine both for the team and for myself. It was an emotional rollercoaster but to end it so well and for the team to have performed so well overall is the main thing.”

Alice said: “I’m really happy. I felt so nervous going first up on bars for the team but once that routine went well I calmed down a lot. There was a bit of extra pressure for me on beam (being he European champion) so to nail that routine also felt really good. The team all fought for each other today, we had a great team spirit and I think we did a really good job.”

Men’s team qualifying begins tomorrow (Sunday 6th), with the first 4 of 8 subdivisions. The British team will compete on Monday 7th, in the seventh subdivision.