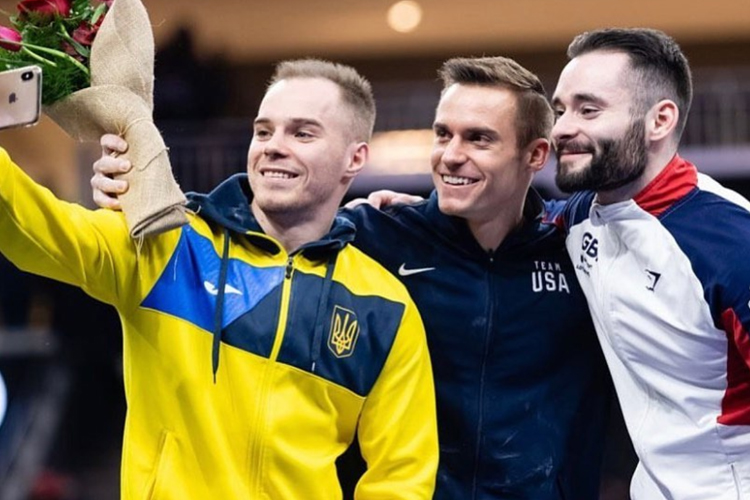 James Hall produced a string of impressive routines to claim a fantastic bronze medal at the American Cup in Milwaukee, the first all-around World Cup of the four-event series.

There was also a highly encouraging performance from first year senior Jennifer Gadirova. It was Jennifer’s senior international debut, and she looked right at home amongst some of the world’s best, finishing in fourth place.

The World Cup series provides the competing nations with an opportunity to qualify an additional place for the 2020 Olympic Games. The top three nations with the best results across the four World Cups will see another gymnast board the plane to Tokyo. Read our full guide to artistic Olympic qualification.

James was in inspired form, and against a high-quality field that included the likes of America’s Samuel Mikulak and Ukrainian legend Oleg Verniaev, he was in the mix for medals throughout.

A strong start on floor (13.966) set the ball rolling, and James didn’t let up, finding himself in second place heading into the final rotation. Despite a fall on his final apparatus, high bar, James retained his place on the podium with an all-around score of 82.999, narrowly missing out on silver.

The result sees James pick up 50 Olympic points for the British team.

In the women’s event, Jennifer excited the crowds to finish fourth, and also won 50 Olympic points for the British team in the process. Her competition was that impressive she topped the scoring on both vault (14.566) and floor (13.700), and had the second best score of the day on beam (13.933), going towards her all-around total of 53.565.

The next stop of the all-around World Cup series is in Stuttgart, Germany, on 21st March with James and Kelly Simm selected for the British team.

A huge congratulations to James, Jennifer, and all coaches.