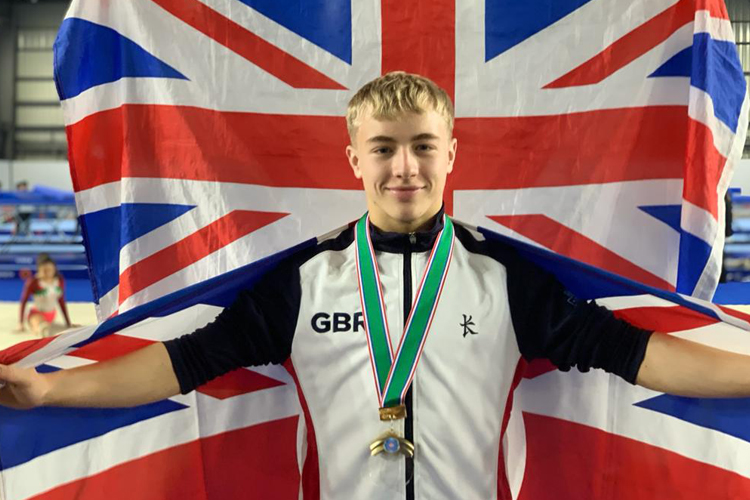 The British team, consisting of 63 gymnasts from age 10 to 21, are competing in the incredible Ariake Gymnastics Centre, where next year’s Olympic competition will take place.

The opening two days have seen 16 British gymnasts successfully qualify for finals, showcasing that the future is extremely bright in these disciplines.

Medals for GB
Competing in the 15-16 men’s tumbling final, William Cowen, who had qualified in 5th place for the final, produced his best when it mattered to take gold with 36.000.

Tyler Cole-Dyer then went on to win a brilliant silver in the 13-14 men’s trampoline final, scoring 55.165. And Tyler’s excellent competition continued when he scooped a second silver medal of the Championships, this time in the synchro final with teammate Ryan Brown. The duo scored 47.560 to make sure of second place.

Two gymnasts successfully made it through to the final of both the men’s and women’s 17-21 competitions. In the men’s final, it was Benjamin Goodall that medalled for GB, winning bronze with 34.800, with William Finn placing 6th. Megan Surman then claimed the fifth medal of the Championships for GB with silver in the women’s final (32.700). Amy Campbell finished just outside the medals in 4th.

Finals
With several gymnasts successfully making it through to finals, here’s a quick run-down of where they placed. Congratulations to all of the gymnasts that have competed so far and good luck to those competing this weekend.

The competition concludes on Sunday (8th December). You’ll be able to read the full report on Monday.