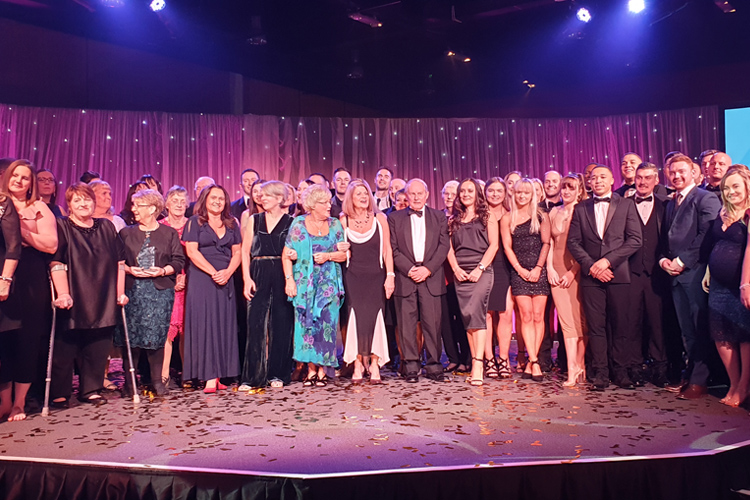 Inspirational people from the gymnastics community have been recognised at the 2020 British Gymnastics National Awards, held at The International Centre, Telford.

Nearly 400 people attended the evening where the outstanding achievements made by gymnasts, volunteers, coaches, clubs and community members were acknowledged.

Winners and recipients from grassroots to elite level were presented with their awards at the ceremony, hosted by BBC Breakfast and BBC Sport presenter Holly Hamilton. With members of the community and a host of European, world and Olympic medallists in attendance, it was a night of celebration in Telford.

Jane Allen, Chief Executive of British Gymnastics said: “Congratulations to all the nominees, winners and recipients who joined us for this special evening. It was an honour to see so many inspirational figures from our community in the same room.

“From grassroot clubs and volunteers to international athletes, we have celebrated success across the sporting spectrum. We are incredibly thankful for the hard work and dedication that is put in by our members who help to ensure that gymnastics thrives.”

Head Men’s Coach at City of Birmingham, and personal coach to Joe, Lee Woolls, picked up the Outstanding Coach of the Year award, as did Max’s personal coach and Director of Coaching at South Essex, Scott Hann. Rob Small is the Tumbling Head Coach for Great Britain, and he too was recognised for guiding both the men’s and women’s teams to world gold.

Two of our most decorated gymnasts were inducted in to the British Gymnastics Hall of Fame. Louis Smith MBE and Daniel Purvis join a select few to have been inducted since Beth Tweddle MBE became the first in 2014. Read more.

17-year-old Lucy Wallace from Ballysillan Gymnastics Club in Belfast was presented with the National Young Volunteer Award amongst some incredible nominees, and Peter and June Brooke were announced as National Volunteer Award winners. They have volunteered in the sport for more than 40 years, most recently at Goole Gymnastics Club where they have helped to transform the club.

Valley’s Gymnastics Academy were another of the big winners on the night, with the club taking home two awards. They were announced as National Club Award winners (over 250 members) and, to cap off a brilliant night for the club, they also won the National Award for Equality and Inclusion (club or organisation) for working consistently in the community, providing additional opportunities for underrepresented groups.

The National Club Award for a club with under 250 members went to Sparta Trampoline Club in Scotland, where they have provided a quality and enjoyable experience for their members, making classes accessible to gymnasts of all ages and abilities.

Joanne Dicken from Durham works at Stainsby School of Gymnastics and scooped the National Award for Equality and Inclusion (individual). Joanne is known for engaging with the community and has greatly increased the opportunities for those in the area, regardless of ability or additional need.

Recipients also included members who were recognised for outstanding contributions to safeguarding and education, ensuring best and leading practice, embodying the high standards and values of the sport.

Clare Saporita from Robin Hood Gymnastics and Michele Cowan from Abbey Gymnastics in Belfast, shared the National Safeguarding Award, having delivered a committed and enthusiastic service to the welfare and safeguarding of children within the gymnastics environment.

The Education Award recognises an organisation or individual who has played a crucial role in providing excellence in delivery of coach education, and this year the winner was Pete Etherington. Pete delivers courses from grassroots, in multiple disciplines, right the way up to high performance level.

Brendene Hardy was awarded the Frank Edmonds Trophy. Having been involved in gymnastics for 46 years, Brendene was seen as the perfect recipient of the award for going above and beyond for our sport.

Brian Everett, who joined the Board of British Gymnastics in 2011 and became President in 2016, was recognised for his outstanding service with Honorary Life Vice Presidency. Brian stepped down from his role in 2019, after serving the maximum Board tenure of eight years.

Karen Hutchinson was announced as the very first winner of the British Gymnastics Foundation Award for working tirelessly, assisting the charity to continue transforming lives through gymnastics.

British Gymnastics’ Patron, The Rt Hon Sir John Major KG CH, who we were delighted to welcome to awards, said: “Gymnastics is an art as well as a sport and every single one of our successes is a reward of dedication and of high-quality coaching.

“I warmly congratulate all of our winners this evening. I think it is likely that everyone here, in one way or another, has contributed to the growing success of gymnastics, and so as Patron, I would like to thank you for all you have done in the past, and for all, I hope, you will continue to in the future; because the future of gymnastics looks very promising indeed.”